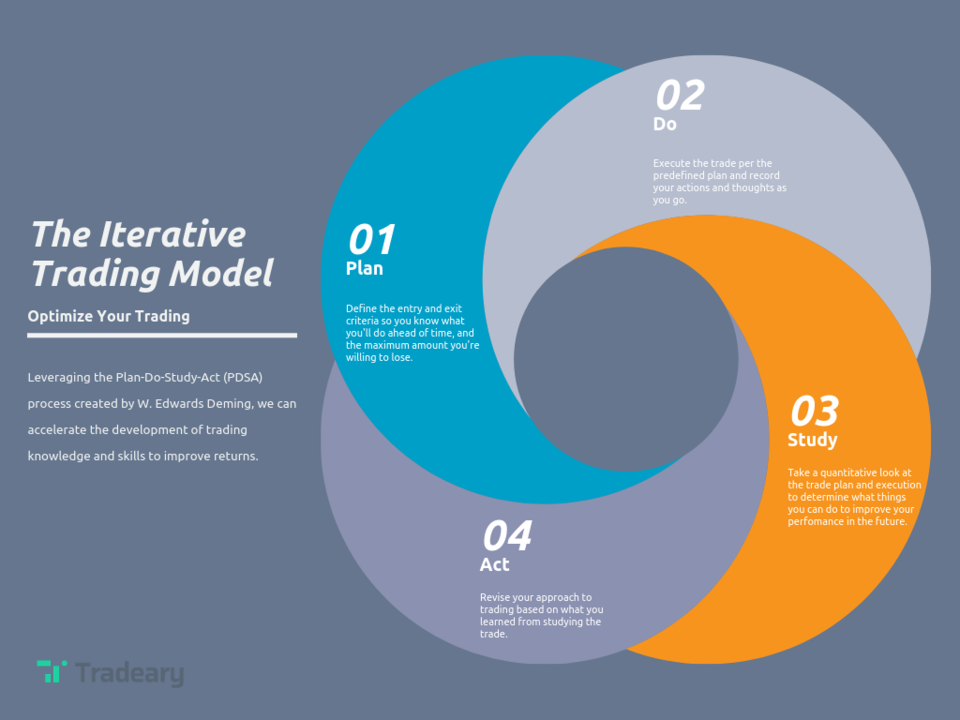 Improving your trading performance is a process - one that takes an iterative approach towards improvement.  The chances that someone will learn how to trade on their first trade is slim to none. However, with a disciplined approach people can boost their returns.

It doesn’t help that what may work for one person, doesn’t necessarily work for another.  Each person is unique - emotionally, time commitments, risk tolerance, etc.

The best traders learn from trades; what works and what doesn’t.  Unfortunately, those that don’t learn from their trades repeat their mistakes over and over again, often with big losses incurred.

So the question is: what’s the best way to optimize trading learning?  Fortunately, there are existing methodologies that help provide a framework for a disciplined approach.

In the late 1940’s W. Edwards Deming, a New York University statistics professor, was working on Japan’s 1951 census.  Deming was asked to help as General Douglas MacArthur was frustrated that he couldn’t even make a phone call [without the line going dead]. He used statistical analysis along with learnings from Walter Shewhart to create the Plan-Do-Study-Act cycle (PDSA).

Using PDSA as a process creates a routine that lends itself to constant improvement.  Applied to trading, PDSA looks like this:

Create a trade plan which, at a minimum, includes:

The ‘do’ step of PDSA is what most people are familiar with - it’s the actual execution of the trade.

Entry should happen once the trigger(s) occurs (the entry criteria are met).  Also, a stop loss order might be created immediately after placing the trade to ensure that emotions don’t prevent taking a loss [before it grows to a larger amount].

The last part of this step would be exiting the trade when either the stop loss or price target levels are met.

If a proper trading plan was created, the ‘do’ step should just be the execution of the plan.

Upon completion of the trade, there should be a review to determine what went well, and what could be improved on.  Basic questions include:

Unfortunately, this crucial step is the one that most people fail to do.  Instead of diligently recording the trade details, measuring the results, and conducting a retrospective study, they don’t learn.  That’s too bad because a little more work and discipline could improve their future trading by isolating variables and maximizing the things that cause gains while minimizing those that cause losses (based on quantitative measures of past trades).

Simply put: how can traders learn, if they don’t take the time to properly measure and evaluate past behaviors and thoughts?

The reason that this step is skipped is because people are either too lazy, or too undisciplined to take the extra time to study.  But isn’t it worth a little extra time if it results in greater profitability? After all, that’s the entire point of trading.

Based on the learnings from studying the trade, traders adjust their trading.  Common things that might be adjusted:

Rarely are traders simply born with the skills and knowledge to reach their maximum profitability.  That’s no different than most other things that require thought, experience and/or knowledge. Sometimes traders learn things without recording them, but doing so is terribly inefficient.

Not recording the different variables/factors that made up a trade - from conception thru execution - lends itself to bias, such as confirmation bias where the person selectively remembers the trades that support their current beliefs (ignoring ones that would discredit them).

It also prolongs learning.  People can haphazardly learn over time, or they can expedite learning by being diligent and making it a routine to study each trade.

Using processes with purposeful recording, measurement and learning built in has worked for over half a century for businesses as they constantly look to improve the quality of their products or services with Total Quality Management (TQM), Six Sigma, Lean Production/Manufacturing, and Agile.

Habitually doing steps to learn from each trade also reinforces the discipline required of successful traders.  People following a repeatable process are more apt to also create trading plans, and hopefully following them.

Over time, creating and following a framework that includes reviewing each trade methodologically should pay off over time.  It will accelerate the development of trading skills and knowledge, as well as lead to more consistent trade execution which should drive more regular gains.

Sporadic reasons for entering a trade, as well as inconsistent execution leads to random results.

Diligence in studying what works (and doesn’t) and discipline in execution are things that separate the best traders from the rest.